Nitro-V steel is a relatively new stainless steel introduced on the market in 2017 by New Jersey Steel Baron. It is an improved version of AEB-L, with added nitrogen and vanadium to get high hardness, better edge retention, and outstanding corrosion resistance.

Because of its properties, Nitro-V is the go-to steel in making thin blades like those used to make knives and razor blades. It makes the best diving knives because the edges remain razor sharp for long and it is not susceptible to rusting.

Knifemakers and users swear by Nitro-V knives because they attain a razor-sharp edge faster, maintain the sharpness for long, and they do not rust.

The hardness of Nitro-V is 58-62HRC. It has a wide hardness variance because the end product depends on the heat treatment used by the manufacturer. Because of the hardness level of this steel, it can be cut into very thin blades, perfect for making slicing knives.

Nitro-V offers great toughness compared to other steels in the same category, which is against the expectations of many because most hard steels have poor toughness. It beats most premium steels like M390, CPM 154, and S35VN.

The balance between hardness and toughness makes it a favorite of many. Therefore, if you are searching for knives that can withstand tough applications, look into the varieties of Nitro-V steel knives.

Being an improvement of AEB-L, Nitro-V steel is expected to offer better edge retention. However, both steels contain the exact amounts of carbides; hence they provide the same level of edge retention. The edge retention is lower compared to other high-end stainless steel.

This is not to say that Nitro-V offers bad edge retention. It will serve you for a long time before becoming dull. Its edge retention can be compared to that of 52100 steel, this is a bit low compared to steel like 440C and Crucible powder steels.

Nitro V is martensitic stainless steel with high chromium percentage and nitrogen in its alloy composition, Nitro-V offers excellent corrosion resistance. The blades of Nitro-V do not rust when used in salty water, and that is why it is perfect steel in making diving knives.

Although this Nitro-V steel does not rust easily, it is advisable to wash and dry the knives after use and before storage to keep rust and stains at bay.

Nitro-V steel has decent wear resistance, thanks to the improved alloy. Although it is not the best in wear resistance out there, you can be assured that knives made from this steel will not bend or deform on tough applications.

However, if you are using a knife with a very thin blade, do not expose it to very challenging tasks. You will be setting it up for failure. If it is a slicing knife, use it for slicing only, and it will serve you for a very long time.

S35VN steel is better steel overall than Nitro-V steel for fixed and folding blades. Nitro-V is tougher than S35VN, it doesn’t hold an edge as well as S35VN despite the fact that they offer almost similar hardness of 61HRC. S35VN offers better wear resistance than Nitro-V due to the higher amounts of vanadium, nitrogen, and chromium that aid in the formation of hard carbides.

Despite the fact that S35VN holds an edge longer, with advanced sharpening Nitro-V steel can be much sharper, however, it won’t hold it for long and will require frequent sharpening. At its thinnest Nitro V blade is extremely sharp and it is for this reason that it is used in making razor blades.

In terms of corrosion resistance, they offer almost identical performance but S35VN slightly beats Nitro V due to a more refined alloy and powder metallurgy production process that enables a more superior combination.

Nitro V is tougher steel than S30V and most other mid-range and premium steel like S90V. Nitro V toughness can be bettered by a few steels like AEB-L, LC200N, and 19C27.

Nitro-V is stainless steel with great corrosion resistance due to the added nitrogen, but 3V is not stainless steel and will rust when used in corrosive environments. Nitro-V offers great edge retention and wear resistance. It is also easier to get a super sharp edge with Nitro V. On the other hand, 3V shines in toughness.

M390 is premium steel, while Nitro-V belongs to the high-end category. You can already tell that M390 is better than Nitro-V. It offers excellent edge retention among the best in the market, outstanding wear resistance, and better corrosion resistance with about 20% chromium. Nitro V however beats M390 on toughness and ease of sharpening.

M390 tends to be rare and is found in top dollar knives, it is great for knives that won’t require frequent sharpening and knives that are to be used in corrosive environments.

Nitro V steel is an iteration of AEB-L steel, it can be considered Nitro V equivalent only that Nitro Steel has added Vanadium and Nitrogen to improve corrosion resistance. The addition of these elements enables Nitro V to get a sharp edge quicker but not for long as the added Vanadium is not enough to start forming hard carbides for better edge retention.

Then again 14C28N steel can also be considered Nitro V equivalent only that 14C28N has more vanadium elements. The addition of more Vanadium elements enables the formation of hard carbides that gives 14C28N a better edge retention. In terms of wear resistance they are almost identical, their performance in other sectors only differs by slight percentages.

Nitro-V steel is good knife steel because it offers great sharpness, corrosion resistance, toughness, and it is easy to sharpen. It is a good steel for both knife makers and users on a budget who want an alternative over crucible and Bohler steel variants. Nitro V offers outstanding sharpness on thin blades at higher hardness, Nitro V equivalent can be 14C28N and AEB-L steel. 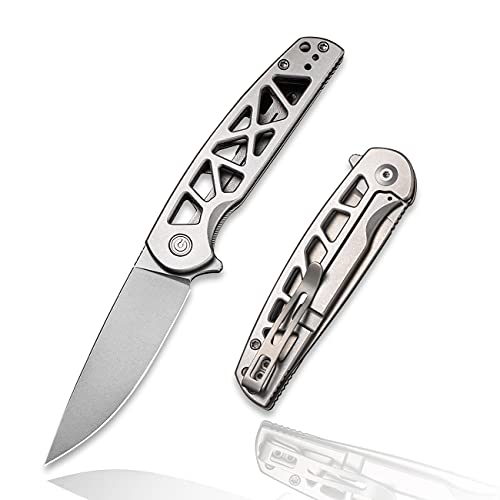 Looking for a great everyday pocket knife? Check out the CIVIVI Perf Frame Lock Pocket Knife. Made with a Nitro-V steel blade, it's tough and has excellent corrosion resistance. The razor-sharp cutting performance will make quick work of whatever you need to cut. Plus, the skeletonized handle design without compromising strength makes this pocket knife both lightweight and durable. The reversible clip allows for discreet carry, making it perfect for outdoor hunting, hiking, camping, bushcrafting, and more.